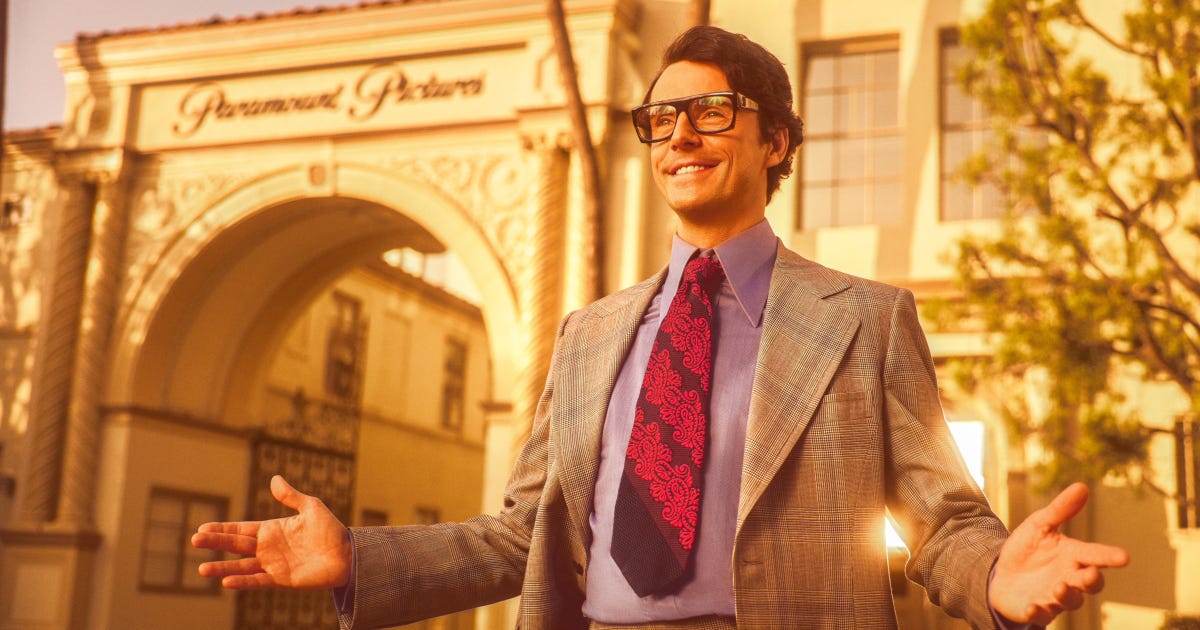 Leave the gun, take the cannoli. I believe in America. An offer you can’t refuse. Even now, 50 years after it first came out, The Godfather remains an iconic cultural touchstone. The real-life stories behind the scenes were also filled with drama, colorful characters and a few dashes of sudden bloody violence, dramatized in new miniseries The Offer — and while it obviously won’t measure up to the majesty of its famous subject, this highly watchable glimpse into the magic of movies makes an offer that’s hard to refuse.

Streaming on Paramount Plus April 28, The Offer tells the story of how Mario Puzo’s bestseller came to the screen under the stewardship of director Francis Ford Coppola — no thanks to the money men who tried to kill the production or the actual mafia wise guys killing each other uncomfortably close to the movie. Filled with lavish period suits, settings and sunglasses, the show is a fun look at 1970s Hollywood, in which decadence and business threaten the dawn of a new golden age of cinematic artistry.

In The Offer, Miles Teller plays Al Ruddy, a brawny but bored computer programmer who’s seduced by showbiz. The series is largely based on Al Ruddy’s accounts of those days, and Teller is an OK lead, but the other characters are much more compelling. Ted Lasso star Juno Temple is fantastic as his tough-talking, problem-solving assistant, tapping into the network of the women who acted as secret levers making this man’s world go round. Giovanni Ribisi and Burn Gorman are also in great form as a mafia don and a studio head whose power allows them to be a little odd.

It’s fun hanging out with this crew of misfits and their conflicting motivations. The Offer repeatedly explores how The Godfather’s near-universal appeal stems from the fact that while it’s a story about crime and about America, it’s first and foremost a story about family. It’s genuinely satisfying seeing an oddball family form around this thing called The Godfather, united by a desire to create something wonderful.

There’s a fine line between homage and pastiche, and The Offer tries hard not to wink at the audience by re-creating the actual Godfather films. It evokes the original at times, for example cross-cutting between conversations and horrific violence in the style of the first film’s climatic montage. And the various sit-downs in darkened kitchens and dim bars evoke the shadowy cinematography employed by The Godfather’s director of photography, Gordon Willis. In The Offer, Coppola and Willis discuss how these deep shadows are a visual metaphor for the moral darkness of their twilit crime family, and that’s just one of the many cool glimpses into the minutiae of the filmmaking process, from location scouting to budget headaches. One scene sees Willis and production designer Dean Tavoularis consider how a fake wall will impact the lighting of a scene, and these behind-the-scenes snippets will appeal to any film nerd.

The series also has fun casting the familiar faces, including Anthony Ippolito as a nervy young Al Pacino. Justin Chambers is suitably charismatic — and possibly underused — as Marlon Brando, although I’m less convinced by Frank John Hughes doing Frank Sinatra as a fuhgeddaboutit wise guy. Generally though, The Offer avoids impersonation or cheesy “Hey, let’s put that in the movie!” moments.

Instead, the modern viewer is invited to go along for the ride with the people and things behind the film, beginning with Mario Puzo’s reluctantly written novel and going deeper with Coppola’s rich imagining of what the story could be. Fantastic Beasts star Dan Fogler draws you into Coppola’s mesmeric vision, helping viewers of The Offer understand and become immersed in the promise of this strange film before it even existed. By the time the actors gather and filming begins, we’re treated to hairs-on-the-back-of-the-neck moments as instantly recognizable scenes are conjured before our eyes.

At 10 episodes, The Offer is basically longer than the actual Godfather trilogy, and that’s just too long (the first three episodes are available on April 28, then a new installment each week). While I wouldn’t want to lose any of the fascinating detail, the show does spin its wheels with its exhaustive accounts of the battle between filmmakers and money-minded boardroom guys. There’s an awful lot of Colin Hanks in the show, more than is deserved by his one-dimensional character of the small-minded money man from Paramount parent company Gulf and Western. Funnily enough, stuffed shirts from Gulf and Western play a similar bad guy role in LA Lakers-themed series Winning Time, another real-life dramatization currently airing on HBO, and The Offer really lacks Winning Time’s zingy dynamism.

Perhaps the standout performance comes from Matthew Goode as fabled Hollywood impresario Robert Evans. Goode plays Evans as a groovy smoothie who nonetheless reveals hidden depths. He’s smarmy but capable of sincerity, manipulative yet loyal — and even seems to actually care about movies.

That’s possibly the best thing about The Offer, which is more than just Godfather trivia acted out. Ultimately it’s about the allure of the moving image. The Offer may be a little dragged-out, and it lacks the dynamism of similar shows like Winning Time. But it does a great job of casting a little of that stardust, evoking the unifying power of the silver screen. After watching this show, if you’re not itching to get to a movie theater or maybe even dust off that screenplay, then I don’t know what to say to you.

At the very least you’ll fancy a cannoli.