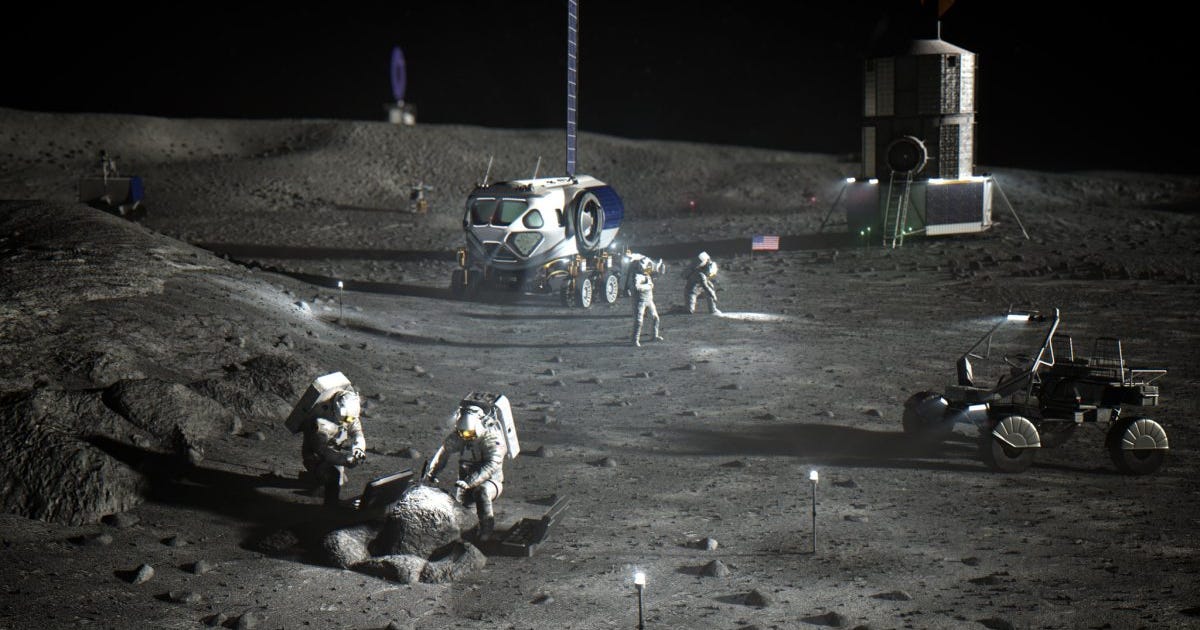 NASA plans to send a crew of astronauts to the moon in 2025 armed with the exciting task of building the first-ever lunar science base. It’s an ambitious dream that stems from the agency’s overarching Artemis mission, of which this year’s Artemis I lift-off is the first vital step.

But to construct and live in any sort of Sci-Fi extraterrestrial space station, humanity needs to, well, live. And to live, we need water.

That’s why, per a paper published last month in the journal Scientific Reports, a group of researchers have some terrific news for the next generation of moon explorers. According to their calculations, there may be a whole lot more water on the moon than once expected — and it seems to have originated from none other than the bluest planet of all: Earth.

“As NASA’s Artemis team plans to build a base camp on the moon’s south pole, the water ions that originated many eons ago on Earth can be used in the astronauts’ life support system,” Gunther Kletetschka of the University of Alaska Fairbanks Geophysical Institute and lead author of the study, said in a statement.

For Artemis’ moon base camp, NASA has determined that construction will begin at the lunar south pole, simply because scientists already believe there’s a good deal of frozen water hidden beneath the surface.

However, most of the time, lunar water studies calculate this supposed water volume based on theories that connect the quantity to a combination of solar winds, asteroids and comets. For instance, billions of years ago, during a period known as the Late Heavy Bombardment, asteroids and comets filled with hydrogen and oxygen ions are thought to have impacted the lunar surface. These particles presumably fused together, formed water, and voila.

The prevalent theory regarding solar winds, on the other hand, suggests strong gusts coming from the sun might’ve carried the star’s hydrogen and helium atoms toward the moon, interacted with leftover asteroid dust and pretty much generated water that way. Both of these hypotheses are akin to the way scientists imagine water on Earth originated too.

But after studying lunar gravitational data, collected by NASA’s Lunar Reconnaissance Orbiter, the recent study’s team realized there could very well be a third pathway to explain lunar water — and one that could account for at least 3,500 extra cubic kilometers (840 cubic miles) of water at the lunar poles. For context, that’s about equal to the amount of water in North America’s Lake Huron, the world’s eighth largest lake.

It’s because, the researchers say, hydrogen and oxygen ions found in Earth’s upper atmosphere might’ve once escaped and fallen onto the lunar surface as the moon passed through our planet’s magnetosphere. Within this region, Earth’s atmospheric ions have a rather high chance of being sort of repelled. And if the moon is right there in the line of fire, the repelled particles would’ve basically shot directly onto the glowing orb.

Further, because the moon doesn’t have a magnetosphere of its own, it wouldn’t have had a way to repel those particles back to Earth. Instead, it’d have been forced to accept the hydrogen and oxygen onto its surface.

Kletetschka compares the concept to the moon being under a “shower” of water ions propelling from the Earth.

The researchers say that once on the surface, these ions would then have combined to form lunar permafrost and, through various geological processes, this frost could’ve been driven below the lunar surface. Slowly, it’d have turned to liquid water.

If true, this would be wonderful for NASA’s Artemis mission because not only can the astronauts tap into the massive water supply for survival, but the lunar space station can also use it for fuel, too. Even deep space missions that’ll use the base as a travel checkpoint one day can stock up on water like filling up on gas at a cosmic rest area.

Plus, remarkably, Kletetschka and fellow researchers say this is a conservative estimate — only 1% of Earth’s atmospheric ions would’ve had to escape and reach the moon for this huge volume of lunar water to exist. If any more than that minuscule fraction contributed to lunar water, well, maybe we can one day add a little water park to our wide-eyed lunar society.