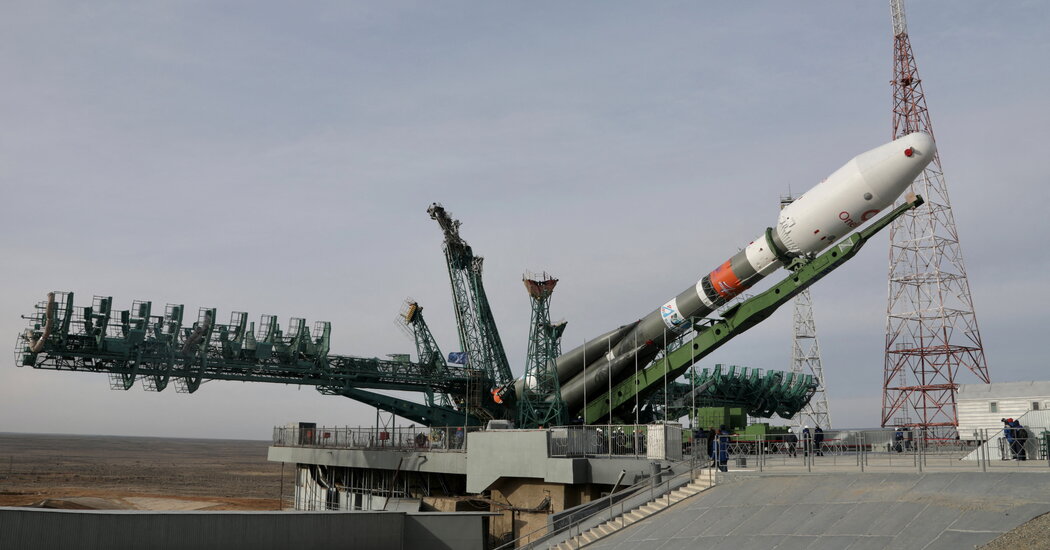 OneWeb, a British satellite internet company that canceled rocket launches with Russia over its invasion of Ukraine, is turning to SpaceX to send broadband satellites into space.

The alliance, announced on Monday by OneWeb, is unusual because SpaceX is currently OneWeb’s primary rival in the market for beaming high-speed internet from orbit to users on the ground. But a messy dispute with Russia’s space agency, Roscosmos, the company’s former launch provider, prompted OneWeb to work with SpaceX. The move also underscores the growing isolation of Russia’s space industry from partners in the West following the initiation of Moscow’s war with its smaller neighbor.

The new agreement with SpaceX would allow OneWeb to finish building its constellation of 648 satellites in orbit and beam internet under a new timeline, Neil Masterson, OneWeb’s chief executive, said in a statement.

“We thank SpaceX for their support, which reflects our shared vision for the boundless potential of space,” he said.

OneWeb did not say how many launches it purchased from SpaceX, which rocket the company will use or when it now plans to complete its satellite constellation. SpaceX’s Falcon 9, which costs roughly $62 million per launch, is its most active launch vehicle. In addition to its agreement with SpaceX, OneWeb is talking with other launch providers, Ruth Pritchard-Kelly, a senior adviser on regulatory affairs to OneWeb, said in an interview.

The earliest SpaceX launch carrying OneWeb satellites “would be this summer, but we don’t have a date,” Ms. Pritchard-Kelly said.

OneWeb’s internet business is active in parts of the Northern Hemisphere, but the company will no longer be able to meet its goal of providing full global service in August 2022. Starlink, the competing internet constellation from SpaceX that relies on thousands more satellites at a lower altitude, is already available to some consumers on a pilot basis, and has been shipped in recent weeks to Ukraine.

OneWeb has sent 428 satellites — 66 percent of its constellation design — to orbit since 2019, each time using Soyuz, Russia’s workhorse rocket that has been active since the days of the Cold War space race.

In February, three days before OneWeb’s planned satellite launch on a Russian Soyuz rocket from a Russian spaceport in Kazakhstan, Dmitry Rogozin, Roscosmos’ director general, demanded that OneWeb cut ties with the British government, which had invested $500 million in the company in 2020 to help pull it out of bankruptcy. Mr. Rogozin’s ultimatum followed a barrage of Western sanctions levied on Russia over the invasion.

OneWeb instead canceled all six of its planned Soyuz launches, ditching its goal to complete its satellite constellation by August. Neither Britain nor any European Union country has an available rocket capable of delivering the satellites to orbit. A OneWeb executive at the time said the company was considering rockets in the United States, India and Japan for its launches.

Signs of a stalemate amid stalled talks. After nearly a month of fighting, the war appears to have reached a stalemate. President Volodymyr Zelensky of Ukraine has called for renewed peace talks with Russia, despite few signs of progress after four days of negotiations last week.

OneWeb officials said they did not know the fate of the 36 satellites that had been put aboard the Soyuz rocket whose mission was canceled last month. “They were removed from the faring,” Ms. Pritchard-Kelly said of the satellites, referring to the shell that protects a rocket’s payload, “and I do not personally know whether they are still in Kazakhstan or not.”

OneWeb is in talks with Arianespace, the French rocket company that brokered OneWeb’s Soyuz launches, about retrieving the satellites and securing a potential refund for the axed Soyuz missions, Ms. Pritchard-Kelly said.

“Nothing has been destroyed; all we’ve done is lost time,” she said.

Mr. Rogozin, the head of Russia’s space agency, said on Twitter on Monday that OneWeb was “doomed,” repeating previous claims that not launching on the Soyuz would drive the company back into bankruptcy. He suggested that SpaceX could not deploy OneWeb’s satellites successfully but offered no explanation for why it lacked the capability.