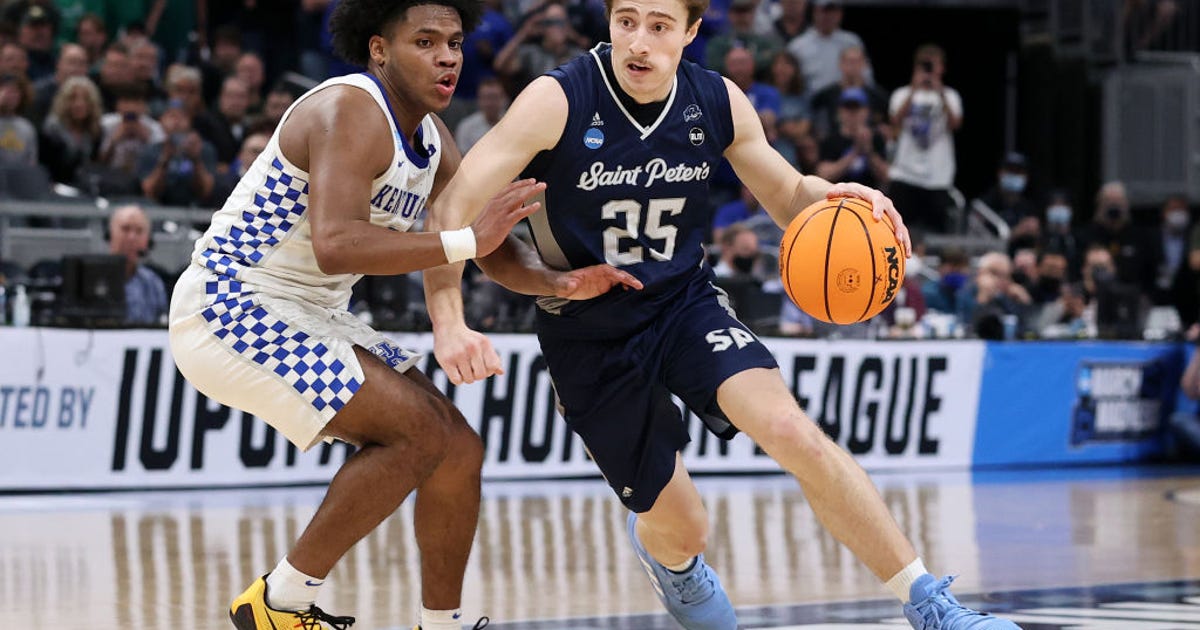 The Peacocks are still strutting. After stunning No. 2 Kentucky in the first round and taking out No. 7 Murray State in the second round, little Saint Peter’s College from Jersey City, New Jersey, is just the third No. 15 seed ever to make it to the second week of the NCAA tournament. Saint Peter’s takes on No. 3 Purdue today.

The Peacocks aren’t the only double-digit team still dancing, however, as No. 11 Iowa St. and No. 10 Miami square off today as well. Other Friday games include No. 1 Kansas taking on No. 4 Providence and No. 8 North Carolina taking on No. 4 UCLA.

Kansas is the last remaining No. 1 seed in this year’s tourney after Gonzaga was upset by No. 4 Arkansas and Arizona fell to No. 5 Houston on Thursday night. Houston will play No. 2 Villanova in the first Elite Eight game on Saturday night while Arkansas will face No. 2 Duke in the second game.

Here’s all you need to know to watch the Sweet Sixteen, Elite Eight and beyond, with or without cable.

Where can I see the March Madness bracket?

You can check out all of the regions, results and remaining matchups of the NCAA tournament bracket here.

What’s the schedule for the Sweet Sixteen?

Here’s the schedule for the Sweet Sixteen on Friday and the Elite Eight on Saturday (all times ET):

You can check out the full March Madness schedule here.

Where is the Final Four taking place and what channel is it on?

The Final Four and national championship game will take place in New Orleans at the Caesars Superdome and will air on TBS.

The Sweet Sixteen and Elite Eight games will air on CBS and TBS. Three of the streaming services — YouTube TV, Hulu Plus Live TV and DirecTV Stream — offer both channels needed to watch the remainder of March Madness.

You can also stream the games live with NCAA March Madness Live. There’s a free 3-hour preview, but then you’ll need to log in with a TV provider to prove you’re a pay TV subscriber. The games broadcast on CBS are available with Paramount Plus… but that’s less than ideal because the Final Four games and national championship game will be shown on TBS this year, not CBS.

Can I watch for free?

Yes, you can. There are two ways, but neither will get you through the rest of the tournament by itself.

The March Madness Live app and website offer a free 3-hour preview, after which point you’ll need to prove you are a pay TV subscriber.

The other way is to sign up for a live TV streaming service. Each of the major five services offers a free trial. YouTube TV, Hulu With Live TV and FuboTV offer seven-day trials, while DirecTV Stream gives you five days. Sling TV doesn’t have a free trial, but does offer a $10 discount on the first month of service.

Best options for streaming without cable

YouTube TV costs $65 a month and includes CBS and TBS to watch the rest of March Madness. Plug in your ZIP code on its welcome page to see what live, local networks are available where you live. Read our YouTube TV review.

DirecTV Stream’s basic, $70-a-month package includes CBS and TBS. You can use its channel lookup tool to see if you get a live feed of CBS and the other local networks in your ZIP code. Read our DirecTV Stream review.

Sling TV is a poor choice for watching March Madness because it does not include CBS. Its $35-a-month Blue plan includes TBS for half the games of the Sweet Sixteen and Elite Eight as well as both games of the Final Four and then the national championship game. Read our Sling TV review.

FuboTV costs $65 a month and includes CBS but not TBS. With the Final Four games and national championship game on TBS, FuboTV is not a good pick for college basketball fans. Click here to see which local channels you get. Read our FuboTV review.

You can stream every game of March Madness on the NCAA’s March Madness Live site or app. You can watch for 3 hours for free, but then you’ll need to log in to prove you have a pay TV subscription that includes the channels that televise the tournament. It should be noted that in addition to cable and satellite providers, you can use a YouTube TV, Hulu With TV, DirecTV Stream or Sling TV subscription to access March Madness Live. (FuboTV is the lone exception among the live TV streaming services, because it doesn’t offer any of the Turner-owned stations.)

Latency is an issue with any streaming service and particularly with live sports, where you might also be following along on Twitter and could see a final score before the game actually ends. The NCAA says this year’s streams will offer a 20% latency improvement compared with last year’s. While that is welcome, March Madness Live streams will likely still be behind cable and satellite TV and could also trail streams from YouTube TV and the other live TV services.


Get the CNET TVs, Streaming and Audio newsletter