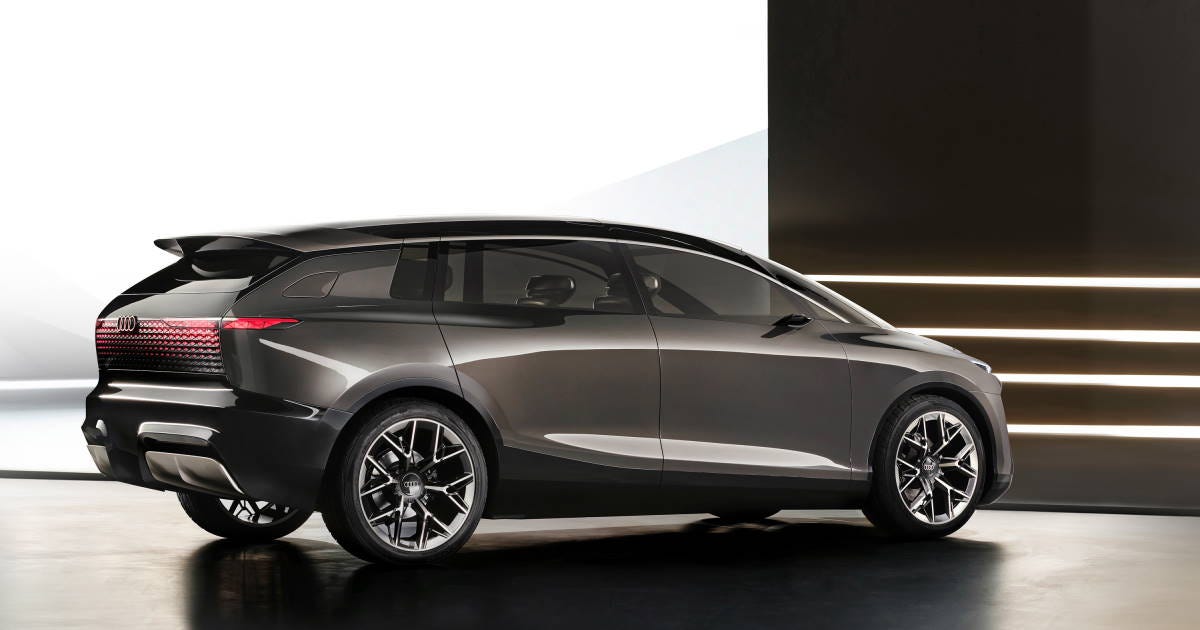 German automaker Audi unveiled its newest vision for the future of urban mobility this week during a presentation streamed to journalists this week from its Ingolstadt, Austria headquarters. The Urbansphere concept is a windswept, electric six-seater designed to serve as a lounge on wheels, a mobile office and a third living space during the hours commuters spend stuck in traffic in dense Chinese megacities and other tightly packed metropolises.

The Urbansphere is the third in a series of Audi Sphere concepts, following the two previous debuts in late 2021. The Skysphere is a two-seat roadster with a variable wheelbase able to transform from grand tourer to nimble sports car. The Grandsphere is a larger four-seat sedan. The Urbansphere is basically a large, electric van aimed at maximizing space, comfort and luxury during slow, urban commutes.

Typically, I think of city cars as small and nimble, but Audi says that it designed the Urbansphere from the inside out with the goal of offering the most interior space of any Audi vehicle to date. To do that without bending space and time, it started with a huge chassis. The Urbansphere’s lozenge-shaped silhouette measures 216.9-inches from bumper to bumper and is 79.1 inches wide. (For comparison, Audi’s Q7 SUV is 199.3 inches long, while a 2022 Toyota Sienna measures only 204.1 inches.) Thanks to its dedicated electric platform, Audi’s designers were able to stretch a 133.9-inch wheelbase — 16 inches longer than Q7 — between its 24-inch double-spoke rollers. To boost maneuverability in tight urban quarters, the concept makes use of rear-wheel steering.

The design features a short front overhang, which contrasts with the longer rear to create a sense of forward momentum. Meanwhile, the dual-tone paint scheme helps slim the silhouette while a bright aluminum bar stretching up the A-pillar, over the side window and into the rear spoiler visually lowers the 70.1-inch roof.

The Urbansphere’s fascia is dominated by a massive, glossy black display that occupies most of the frontal area below the headlamps. Designed with autonomous operation in mind, this Audi Light Canvas features color animations that indicate — in lieu of eye contact with a human driver — the Urbansphere’s actions to pedestrians and other vehicles, such as accelerating or turning, as well as communicating warnings and more. When not showing any intentions or warnings, the Light Canvas also completes Audi’s hallmark grille matching vertical white illumination with aluminum strips at the top and bottom to form the hexagonal single-frame. At the rear of the Urbansphere, you’ll find a smaller Light Canvas forming the taillights.

Underpinning the Urbansphere is Premium Platform Electric (PPE) dedicated EV platform jointly developed by Porsche and Audi, which also underpins the Audi A6 E-Tron Avant concept and the upcoming Audi A6 E-tron production car due later this year.

The Urbansphere uses dual electric motors splitting 396 horsepower (295 kilowatts) and 509 pound-feet of torque between its two axles. Occupying almost the entire base of the vehicle is a massive 120-kilowatt-hour, 800-volt battery pack good for up to 466 miles of estimated range on the WLTP standard — which typically returns higher range estimates than the EPA. To make sure that big battery doesn’t take all day to charge, the concept is capable of up to 270 kW fast charging, which can add over 186 miles of range with a 10-minute session or go from 5% to 80% capacity in just 25 minutes.

The large exterior dimensions combined with the low, flat floor made possible by the electric platform make room for a massive cabin with loads of headroom and legroom, creating a cocoon of luxury for passengers.

The highlight of the Urbansphere’s design are the four captain’s chairs on the first two rows. Particular attention paid to the second-row buckets, which feature expanded slide and recline range and sliding privacy panels behind their headrests featuring integrated private sound zone speakers. The second-row seats can also swivel 25 degrees in the direction of the doors for easier access and get the red carpet treatment with red illumination projected onto the ground leading to the coach-style opposing-hinged doors.

Between the second-row buckets is an extendable center console with a water dispenser along with glass and bottle holders. Further back, a third bench row bumps the total seating capacity up to six passengers when the second row isn’t fully articulated and reclined or cargo isn’t stowed.

By default, the Urbansphere’s instruments and screens are invisible as it’s designed with Level 4 autonomous driving in mind. A steering wheel and pedals can be deployed from their normally retracted state when a human wants to take the wheel, but Audi envisions the concept piloting itself to pick up and drop off passengers, to park and charge itself, and to handle the tedious crawl of urban driving while the passengers relax or engage with other activities. The automaker says it’s working with Volkswagen Group’s CARIAD software division to “introduce this technology by the second half of the decade.”

The sole physical infotainment control is the MMI Touchless Response controller, which is integrated into the door. Users can twist and press this hardware controller to navigate media and menus but, if the seat is reclined too far to reach, it also responds to gesture and eye-tracking controls — hence the “Touchless” response. Users can reach out and twist the air near the controller to achieve the same effect as physical touch.

Passengers can pass the hours entertaining themselves with a large, transparent OLED screen that hangs from the ceiling, smaller OLED displays integrated into the front seatbacks or VR glasses stored in armrests of the doors. Audi envisions connected infotainment that allows users to engage with a range of activities on the go, from shopping and making dinner reservations to music and media streaming, to interacting with live concerts, cultural and sporting events. Alternatively, users can work remotely or, with stress detection powered by facial and voice analysis, receive suggestions for relaxation activities like meditation, complete with private video and audio soundscapes.

The Urbansphere’s cabin is trimmed with wool and wood surfaces that feature integrated touch zones with projected controls that move with the passenger as the seats are reclined. The seats are upholstered with sustainable materials like Econyl recycled padding and bamboo fabric.

I can’t help but think I’d rather work from home than live in my car, but also realize that’s not an option for everyone. The Urbansphere is an interesting experiment in maximizing comfort, time and space in densely populated areas where all three are in limited supply due to hours spent commuting and an intriguing addition to the Audi Sphere concept trio.

Of course, Audi is a brand with four circles in its logo, so I have to imagine there’s a fourth Sphere on a drawing board somewhere in Ingolstadt, but the automaker would not speculate on future debuts.


Get the Roadshow newsletter

See the latest cars and automotive trends from supercars to SUVs. Delivered Tuesdays and Thursdays.