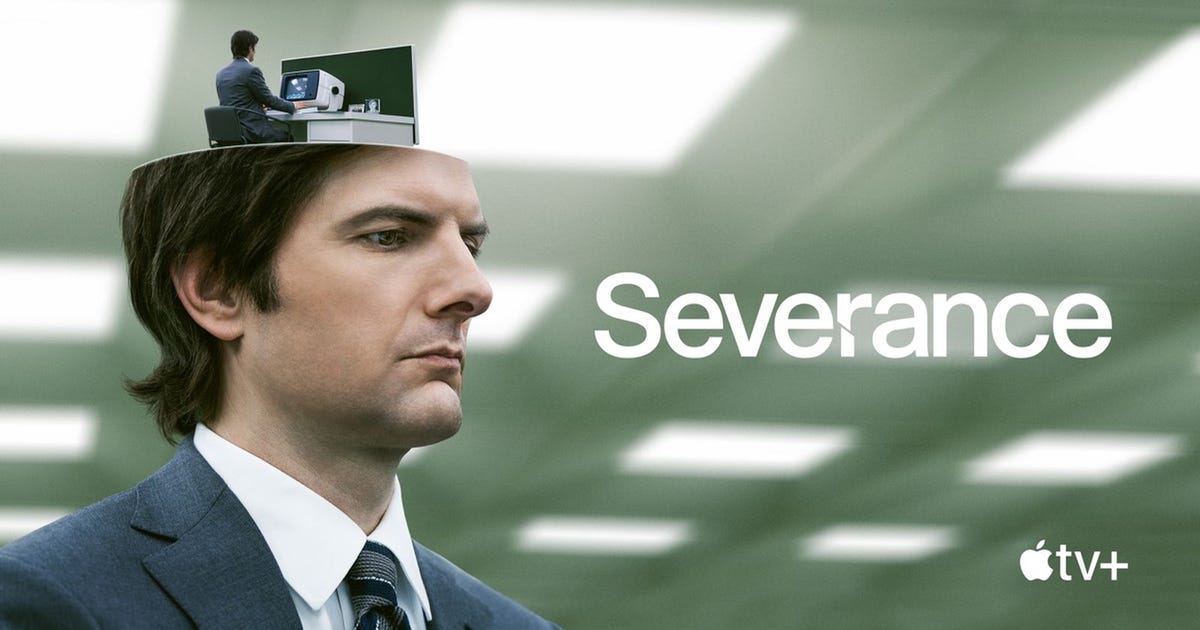 If you haven’t been watching Severance on Apple TV Plus, you’re missing out on one of 2022’s weirdest and best shows.

Severance is a potent blend of surreal workplace comedy and corporate thriller. I couldn’t get enough of its first season. It’s common for shows to present puzzle box narratives, it’s less common to see it come together in such a compelling, expert manner.

Severance has been renewed for a second season and, based on the season 1 finale, the show certainly has plenty of direction for the future. Before the premiere, I spoke with creator Dan Erickson about the show’s timeliness, working with series director Ben Stiller, and got some answers on the logic behind the show’s surreal vibe. (Note: Minor spoilers ahead.)

Set in a mysterious office run by the Lumon corporation, Severance follows employees who have their personal memories wiped every time they clock in for work. They focus only on their assignments and have no contact with the outside world. That is, until a rebel group of employees set out to unravel the corporation’s dark secrets.

The series leans heavily into the inherent weirdness of office culture, which has been magnified significantly during the COVID-19 pandemic. Severance carries an anti-capitalist sentiment throughout, especially when it comes to seeing the team of Lumon’s Macrodata Refinement Department slowly rebel against the company and take back control of their lives. Its style is a slick blend of the workplace humor from 1999 satire Office Space, punctuated with the unsettling impact of Black Mirror’s best episodes.

The issue of work/life balance as a cultural touchstone hits differently now in 2022, and creator Erickson is certainly aware of that after seeing the world change during the production of the series.

“We were three weeks away from shooting when the lockdowns happened, and we thought to ourselves, ‘What kind of world are we going to be releasing this show into?'” Erickson says. “But what was so funny is that it just changed the context. I don’t think it lessened the story at all. It just highlighted how weird and hard it is to create that separation [between life and work]. I think people are looking to maintain control of the personal side of their lives. It’s so telling to me that when it became unsafe to go outside, the corporate answer to that was not, ‘Oh, let’s limit what we have to ask people to do.’ But rather, ‘Well, let’s just go into their homes.'”

Severance also explores the strangeness of Lumon’s retrofuturist company: the retro computers and office aesthetics look like they were ripped out of the 1980s. This gives the impression the characters are stepping out of time whenever they go to work — and in some sense, they are. By undergoing the “severance” treatment, the workers essentially create a second version of themselves who only seem to exist in the office and have no memory of the outside world. It takes the dual nature of work/life balance to the extreme, and it’s unnerving to see play out.

This series is also one of the more visually stunning television shows this year. It does an impeccable job of showing just how strange it is to work at this company, where the main characters spend their days sorting numbers into “boxes” on their computers without any clue of what the numbers mean. The visual effects throughout convey paranoia and disorientation within an isolated work environment. It evokes the same style from cerebral shows like Mr. Robot and even from video games like indie favorite The Stanley Parable or Hideo Kojima’s ill-fated horror game P.T.

Elevating Severance’s main story is the cast, which features several comedic actors going outside their comfort zones. Adam Scott’s Mark is largely the plot’s focal point, and Scott does an excellent job blending his deadpan-style humor with his dramatic chops. John Turturro, Brit Lower and Zach Cherry round out a tight-knit team of office workers who have to work together to fight against their employer.

At its core, Severance is about office culture taken to its extreme, and for folks who work in offices today, it can resonate pretty heavily. A defining moment comes when the crew of the Macrodata Refinement finally accomplish their quota. Not only are they treated to a waffle party, but a personalized message that comes in the form of a retro video game cinematic, almost like an ending from a classic Lucasarts game. It’s a strange, endearing scene, but it also left me feeling conflicted.

For gamers, finishing a video game involves many hours of learning the systems at work and overcoming the challenges therein. An ending to a video game can often feel like the game is finally speaking back to you, praising you for your efforts, and rewarding you with a cutscene that wraps up your journey. This is great and all, but on the darker side, Lumon’s version also represents a commentary on how often companies reward their employees for their efforts with minor perks and hollow praise.

The use of a classic video game was deliberate, and it perfectly matched the tone Severance was going for.

“I sent Ben Stiller a clip of King’s Quest V, my favorite game growing up. And I was like, ‘This is kind of what I see,'” Erickson says. “There was that retrofuturist aspect in the scripts when I initially wrote it, but I just really liked that aesthetic.”

Erickson continues, “But that kind of an answer wasn’t enough for Ben, who’s very meticulous about details and logic. It was really open to creating a world that was half real and half not, but it had to at least have its own logic on its own. There’s this sense that you’re in this soup of time and space that could be anywhere and at any time. And so it was scary and fun to get in the heads of those corporate overlords.”

Severance reaches a major turning point in the season finale. Basically, the work team sees the outside world for the first time, confronted with the reality of who their “outie” counterparts really are. This was a perfect way to end the season, and I’m excited to see where the story could go next. Although, it turns out that finale wasn’t the ending Erickson originally had in mind.

“So, it’s funny, when we were writing the season there was going to be another episode after [the finale],” Erickson says. “We talked about this being the penultimate episode and maybe coming and showing the ramifications of it. But after talking about it, I think Ben was the one who said, ‘I think this is it. That’s the end of the season.’ Ultimately, we were all of the same mind.”

I’m usually not one for cliffhangers, but the lack of total closure and sense of mystery we have after the finale left me more intrigued than upset. There’s still much we don’t know about Lumon. What are those numbers the Macro Data Department are sorting? What’s next for the “innies” back in the office?

I can see Severance expanding its scope even further in the next season, but I hope it won’t go too big. The show is at its best when it sticks to the uncomfortable nature of extended office work and the amount of bizarre, off-putting patterns of behavior we subject ourselves to for the 9-to-5. I really enjoyed Severance for how it embraced being weird, but also in how real it could get too.

Season 1 of Severance is available now on Apple TV Plus.


Get the CNET Apple Report newsletter