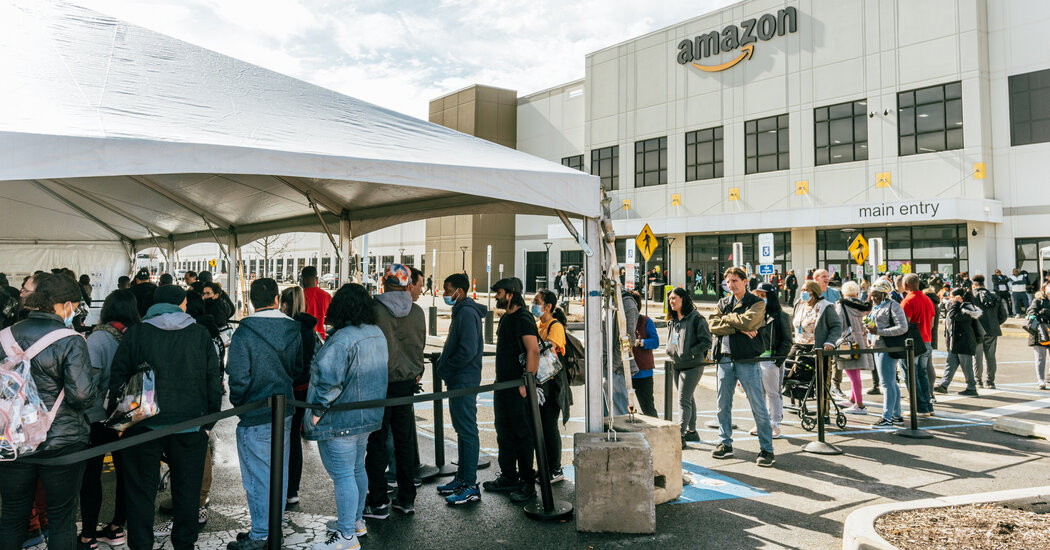 Workers at Amazon’s massive warehouse on Staten Island voted by a wide margin to form a union, according to results released on Friday, in a stunning win for a campaign targeting the country’s second-largest employer and one of the biggest victories for organized labor in a generation.

Employees cast 2,654 votes to be represented by Amazon Labor Union and 2,131 against, giving the union a win by roughly 10 percentage points, according to an initial tally released by the National Labor Relations Board. More than 8,300 workers at the building, the only Amazon fulfillment center in New York City, were eligible to vote.

The win on Staten Island could herald a new era for labor unions in the United States, which saw the portion of workers in unions drop last year to 10.3 percent, the lowest rate in decades, despite widespread labor shortages and pockets of successful labor activity.

No union victory is bigger than the first win in the United States at Amazon, which many union leaders regard as an existential threat to labor standards across the economy because it touches so many industries and frequently dominates them.

The Staten Island outcome came on the heels of what is trending toward a narrow loss at a large Amazon warehouse in Alabama in a campaign brought by the Retail, Wholesale and Department Store Union. The vote is close enough that the results will not be known for several weeks as contested ballots are litigated.

The surprising strength shown by unions in both locations most likely means that Amazon will face years of labor pressure from independent worker groups, large unions targeting the company and environmental and other progressive activists working with them. As a recent string of union victories at Starbucks has shown, wins at one location can provide encouragement at others.

Amazon hired voraciously over the past two years and now has 1.6 million employees globally. But it has been plagued by high turnover, and the pandemic gave employees a growing sense of power while fueling worries about workplace safety. The Staten Island warehouse, known as JFK8, was the subject of a New York Times investigation last year, which found that it was emblematic of the stresses in Amazon’s employment model.

“The pandemic has fundamentally changed the labor landscape,” said John Logan, a professor of labor studies at San Francisco State University. “It’s just a question of whether unions can take advantage of the opportunity that transformation has opened up.”

Amazon did not immediately comment on the outcome. The company can in principle challenge the vote on grounds that the union’s conduct was improper.

Derrick Palmer, who packs boxes at the warehouse and co-founded Amazon Labor Union, said he expected other facilities to follow Staten Island. “This will be the first union,” he said, “but moving forward, that will motivate other workers to get on board with us.”

This is a developing story. Check back for updates.